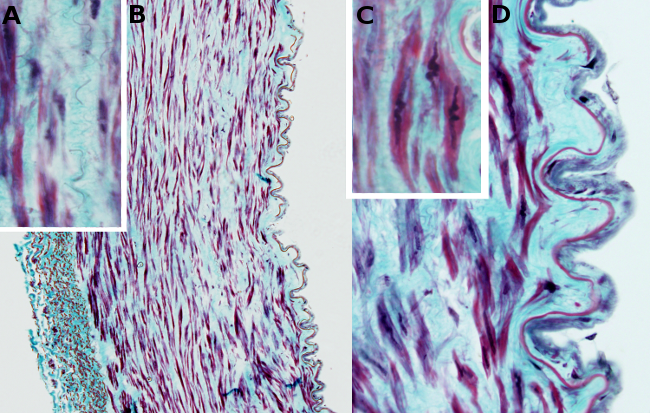 Elastic arteries show the largest diameters and locate close to the heart. Aorta and pulmonary arteries are elastic arteries. They are composed of tunica intima, tunica media and tunica adventitia. Tunica media and tunica aventitia contain a large amount of elastic fibers for resisting the blood pressure caused by the heart beating, and also for maintaining the blood pressure in the vessel during heart diastole, when the ventricle relaxes.

Tunica intima is composed of endothelium, underlying connective tissue and elastic lamina. Besides forming a barrier between blood and the inner tissues, endothelial cells have additional roles like releasing substances to the blood such as chemokines, grow factors, and molecules for vasoconstriction and vasodilation.

Tunica adventitia is mainly constituted by extracellular matrix containing a high proportion of collagen and elastic fibers. Fibroblasts, together with macrophages, are the most frequent cells. Furthermore, the net of blood vessels is observed that are known as vasa vassorum (vessels of the vessels). Some of these blood vessels, mostly capillaries, may extend branches taht extend short distances in the tunica media. Nerve endings can also be found in the tunica adventitia forming a net called nervi vascularis (nerves of the vessels).