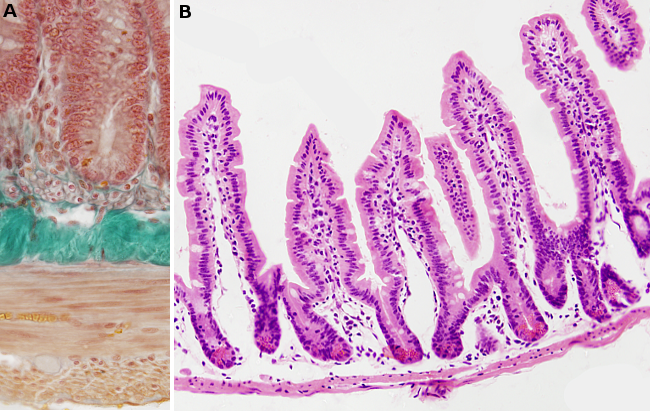 After the stomach, the small intestine, or small bowel, begins in the pyloric orifice, and ends in the ileocaecal valve, where the large intestine begins. Small intestine is a large tube, more than 6 m in humans, divided in three regions: initial or duodenum, around 20 cm long, intermediate or jejunum, about two fifth of the total length, and final or ileum.

Like the rest of the disgestive tube, the small intestine is made up of mucosa, submucosa, muscularis propria and andventitia.

Mucosa consists of three layers: epithelium, lamina propria and muscularis mucosae. Mucosa has structures that increase the inner surface of the tube so that the total absorbing surface is larger.

In humans, there are long folds arranged circularly or helical known as circular folds or valves of Kerckring. They involve the entire mucosa and are found in the duodenum and jejunum, but disappear at the end of the ileum

The inner surface of the small intestine is formed by many expansions of the mucosa, showing glove finger-like shape and 0.5 to 2 mm long. These expansions are known as intestinal villi. In the duodenum region, they show a more blunt tip, whereas in the jejunum are sharper. They increase enormously the epithelial surface, and therefore the number or epithelial cells available for absorption. Each expansion (villus) is made up of simple columnar epithelium in the surface, and loose connective tissue under the epithelium forming the lamina propria of the mucosa. Lamina propria contains many immune cells, some smooth muscle cells, as well as fibroblasts. There is also a dense net of blood vessels with fenestrated endothelium (with gaps in the endothelial cells) in the interior of each expansion. The blood network allows an efficient removal of absorbed substances by the epithelium. A net of lymphatic vessels is also found in the villi.

At the base of the villi, there are the excretory openings of the intestinal glands, also known as crypts of Lieberkühn. The secretory part of these glands are found among the muscularis mucosae, their excretory ducts run through the lamina propria and finally they fuse with the intestinal epithelium.

As mentioned above, connective tissue forms the lamina propria, that is found the interior of the villi, but also at the base of the villi, surrounding the intestinal glands. In the lamina propria there are many immune cells either scattered or grouped in nodules. In the Ileum region, the nodules are found aggregated forming the intestinal Peyer's patches.

In the epithelium, there are five cellular types: enterocytes, globet cells, Paneth's cells, enteroendocrine cells and M cells. Enterocytes are the most abundant cells and the main responsible for the absorption of nutrients from digestion. They also release some digestive enzymes into the intestine lumen. The apical surface of the enterocytes (the plasma membrane domain facing the lumen) are highly folded forming microvilli. These membrane folds increase enormously the effective absorbing surface of the cell, and therefore of the intestine, that is added to the increase in surface provided by villi and by the circular folds. Intercellular spaces between enterocytes are sealed by tight junctions and adherent junctions (see cell junctions), preventing molecules from the lumen to freely cross the epithelium. After the enzymatic degradation of food, virtually all molecules must cross the interior of an enterocyte to be incorporated into the body. Therefore, the internalization of molecules from the small intestine lumen to the blood is a selective and controlled mechanism. Globet cells are distributed along the small intestine and are less numerous than enterocytes. They release mucous substances that cover and protect the luminal surface of the intestine. Paneth's cells are found in the deeper part of the intestine glands. They release several types of enzymes that are thought to control the bacterial flora. Enteroendocrine cells release hormones like secretin, colecystokinin, gastric inhibitory peptide and motilin. Each of them with different roles, like influence the liver activity or modify the peristaltic movements of the intestine. M cells process microorganisms and molecules from the intestinal lumen and present them to the immune system cells, which are in the lamina propria.

Submucosa is a layer of dense connective tissue, with some scattered adipocytes. In the duodenum, the duodenal glands, or glands of Brunner, are specialized in releasing an alkaline secretion to neutralize the very low pH of the partially digested food coming from the stomach.

This layer is made up of two sublayers of smooth muscle: one inner circularly oriented and another outer longitudinal oriented. Between the two sublayers, there is a plexus of nerve terminals called Auerbach's plexus (or myerenteric plexus). Each muscle sublayer performs a different type of contraction with a particular role. The inner one move the digested food forward and backward to mix properly with the digestive substances and to renew the liquid in contact with the surface of the epithelium for a better absorption. The outer longitudinal layer contracts the gut tube and moves the digested material toward the large intestine.

Serosa is connective tissue forming the outer layer of the small intestine. In some regions is convered by the peritoneum.