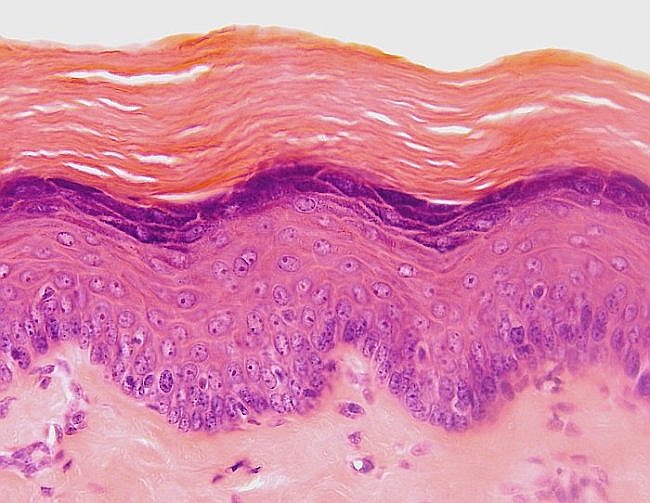 Image from thick skin.
Cursor over the mouse to see where the image comes from.

The stratum basale (also known as stratum germinativum) is the inner layer of the epidermis. It is a one cell thick layer in contact with the basal lamina. Keratinocyte adult stem cells are found in this stratum. These undifferentiated cells proliferate and give rise to keratinocytes that will form the upper layers. In the large image above, several proliferating cells can be observed in different mitotic phases (see also Figure 2). Some stem cells remain as proliferating cells, but others start to differentiate by synthesizing keratin filaments (types 5 and 14), and migrate toward the upper layers. During the travel to the surface, new keratinocytes become part of the different layers of the epidermis. Actually, each of the epidermal strata is a layer of cells in a particular differentiation stage.

The stratum spinosum is the wider layer of the thick epidermis. It contains polygonal cells that, as they get closer to the upper layer, become flattened and synthesize new keratin isoforms (types 1 and 10). These cells show interdigitations that look like spines when observed at light microscopy. That is why it is called stratum spinosum. However, these spines are artifacts because the histological processing causes a general retraction of cell cytoplasm, but not at the places where desmosomes and interdigitations are present.

The stratum granulosum contains 3 to 5 layers of flattened cells that show their cytoplasms filled with basophilic keratohyalin granules. This stratum looks darker than the others after standard tissue staining, such as hematoxylin and eosin, because of its strong basophilia. The content of the granules is necessary for later cytoplasmic keratin aggregation.

The main cell type of the keratinized stratified squamous epithelium is the keratinocyte. There are other much less abundant cell types intermingled with keratinocytes, such as melanocytes, that gives the dark color to the skin and found in the stratum basale, the Merkel cells, with sensory function, and the Langerhans cells, that performs immune roles.