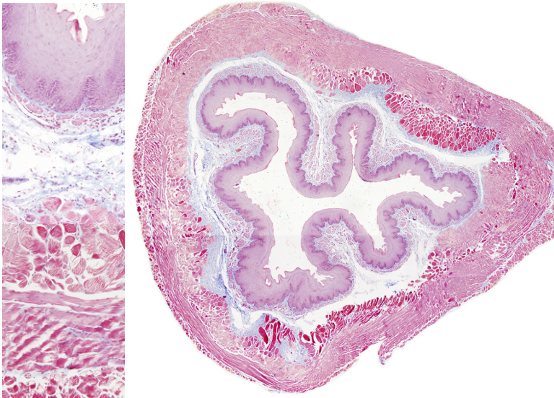 The esophagus a is rather straight tube communicating the pharynx and the stomach. In humans, it is around 25 cm long. It is organized in the four typical layers of the digestive tube: mucosa, submucosa, muscularis propria and adventitia.

Mucosa is composed of a stratified squamous epithelium, although in some species feeding hard food, like rodents, it is partially keratinized. Lamina propria is found under the epithelium. It is a thin layer of connective tissue with scarce cells, scattered lymphocytes and some lymphatic nodules locate close to the excretory ducts of exocrine glands (see below). The muscularis mucosae is, compared with other parts of the digestive tube, quite thick in the upper part of the esophagus, and most of the muscle cells are arranged longitudinally (parallel to the long axis of the esophagus).

Submucosa is dense connective tissue with many elastic and collagen fibers, which allow the large expansions of the esophagus wall when the food, alimentary bolus, goes through the lumen downward to the stomach. Submucosa contains many nerves and sensory ganglion cells, altogether forming the Meissner plexus. There are also lymphatic nodules in the submucosa, sometimes extending into the mucosa. Mucosa and submucosa are folded in several longitudinal ridges that shape the luminal surface. These folds are distended by the alimentary bolus in its way toward the stomach.

The outer layer of the esophagus is the adventitia, a connective tissue sheet fixing the esophagus to other body structures. Adventitia is substituted by a serous layer when the esophagus enters the abdominal cavity.

The esophagus contains glands that release mucous substances. In the upper part, the secretion protects against the alimentary bolus abrasion, and in the lower part protects from stomach reflux. Glands are divided in two types: esophageal cardiac and esophageal proper. Esophageal cardiac glands are very similar to the stomach ones (that it is why the name cardiac), their secretory part localizes in the lamina propria of the mucosa, and are more abundant in the lower third of the esophagus, although they can be found in the upper part as well. Esophageal glands proper have their secretory part in the submucosa and are found all along the esophagus, but more frequently in the upper half. They are tubulo-acinar compound glands (see table of gland morphologies).