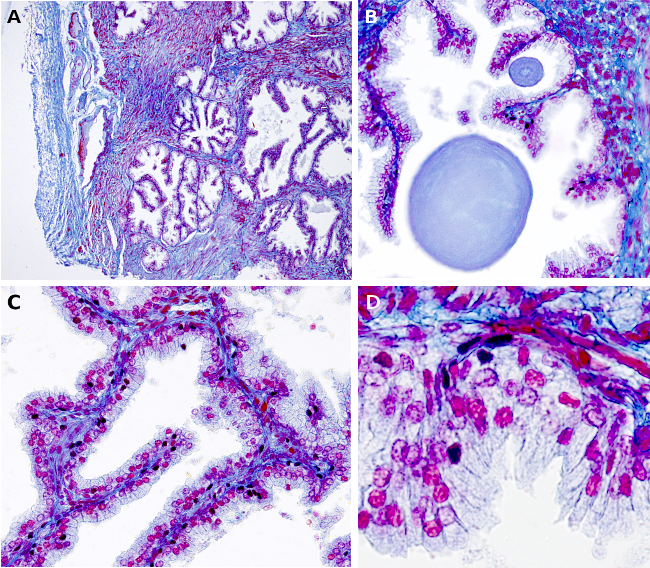 Prostate is the largest gland of the male reproductive system. In humans, it has a size and form similar to a nut, and it is located in the pelvis, in front of the rectum and just below the urinary bladder. Prostate is crossed by the initial part of the urethra (prostatic urethra) coming from the urinary bladder, and by the ejaculatory ducts, after ducts from seminal vesicles and ductus deferens have joined. Prostatic tissue is mostly glandular divided into independent tubulo-alveolar glands that release their products to the urethra through the excretory ducts. Secretory parts (or adenomeres) and excretory ducts of the glands are similar all over the prostate. Glands are surrounded by connective tissue stroma and muscle fibers organized in walls or septa. Prostate is covered by a layer of connective tissue known as capsule, and by a dense layer of smooth muscle cells.

The division of prostate in areas has clinical relevance. However, the number, extension, and features od these areas are controversial since Gil Venet (1953) defined 3 and McNeal (1968) defined 4. In clinic, it is general agreed that there is a peripheral zone enclosing more than 70 % of glands, which is prone to inflammation and concentrates most of the carcinomas. These glands show wider secretory parts and smooth epithelium layer. About 25 % of the prostatic glands are found in the central and transition zones, where it is not frequent to find carcinomas but benign hyperplasias can be easily observed. These glands show more narrow secretory parts and the epithelial surface shows folds.

Tubulo-alveolar glands has a convoluted morphology, therefore, their secretory alveoli look irregular and show variable size. The secretory epithelium has folds and it is mostly biseriate pseudostratified or simple columnar (figure C). The activity of secretory cells influences the cellular height. More activity induces higher cells and less activity makes cells cuboidal or nearly flat. As in the seminal vesicle, two secretory mechanisms have been described in the prostate: apocrine and merocrine. During the apocrine secretion, portions of the apical part of the cells are detached. These cell fragments are known as prostasomes (figure D).

Prostate secretion is up to 15-20 % of the final ejaculated fluid. It is a milky and fluent liquid containing significant amount of citric acid responsible for the acid pH. Moreover, it contains prostaglandin, acid phosphatases and proteolytic enzymes that help make the prostatic secretion to be fluid. The serine protease is known as prostate-specific antigen (PSA) which is important for the diagnosis of prostatic pathologies. A high concentration of zinc is also found, which may contribute to chromatin stability, very condensed in the head of the spermatozoa. Prostatic secretion also contains type A immunoglobulins, like spermine, with bacteriostatic efectts. Spermine crystals, first described by Leeuwenhoek, have been used in forensic science to solve sexual crimes. In the interior of the prostatic gland, concentric laminar structures called amylaceus bodies are occasionaly observed (figure C). It is thought that these bodies result from the precipitation of prostatic secretion around cellular fragments. The number of amilaceous bodies increases during aging and are renamed as concretions or calculus. They can be found in the semen.

The image above is from a monkey prostate, where the regions previously described cannot be distinguished. In non-human primates, like macaques and baboons, prostate shows a different organization with cranial and caudal areas, which are similar to the central and peripheral areas, respectively, in humans.