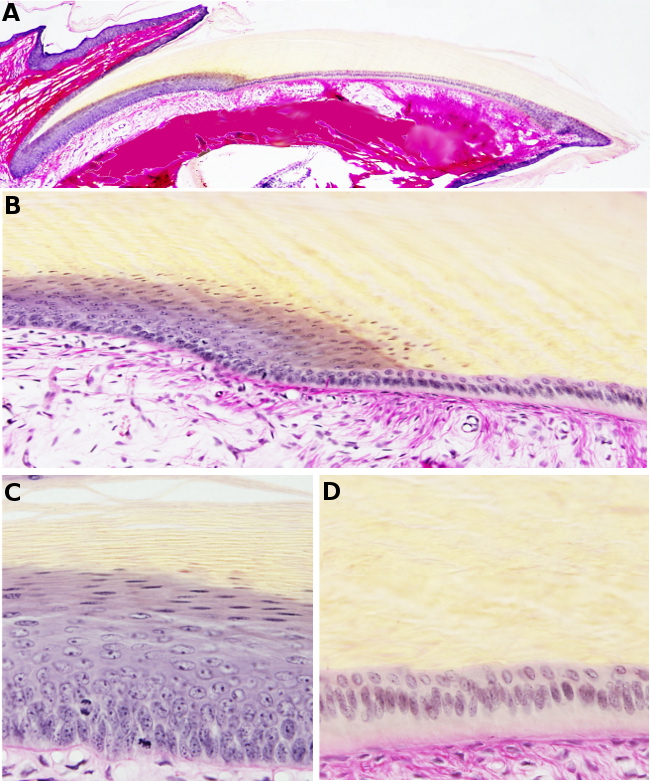 Nails are epidermis derivatives located at the dorsal part of the finger tips. They are composed of many thin layers of dead cornified keratinocytes. It can be said that a nail is a very specialized corneum stratum that does not lose the upper layers. The epidermis region that synthesizes the nail is known as nail matrix, located in the proximal part of the nail (far from the finger tip). The deposition of new nail material is not constant but in waves, and that is why transverse sections of nails looks like striated. From the nail matrix to the distal part (the free end of the nail), under the nail, there is a differentiated epidermis referred as nail bed, to which nail is attached. The nail bed does not participate in the nail synthesis. Nail matrix and newest nail layers are located under a skin fold known as eponychium. The part of the nail under the eponychium is known as nail root, while the rest of the nail is referred as nail body or nail plate. The lunula, a whitish crescent-shape structure, is found close and superficially to the nail root. The white color of lunula is because the epithelium is thicker than in other parts of the nail so that the red color of the blood cannot be seen across. The epidermis under the free end of the nail is known as hyponychium. In humans, neither nail matrix nor nail bed contain pigmented cells.

The dermis under the nail matrix, mainly under the nail bed, contains a large amount of collagen fibers. It is estimated that the growing of the nail is about 1 mm per day in men and 1.4 mm in women.