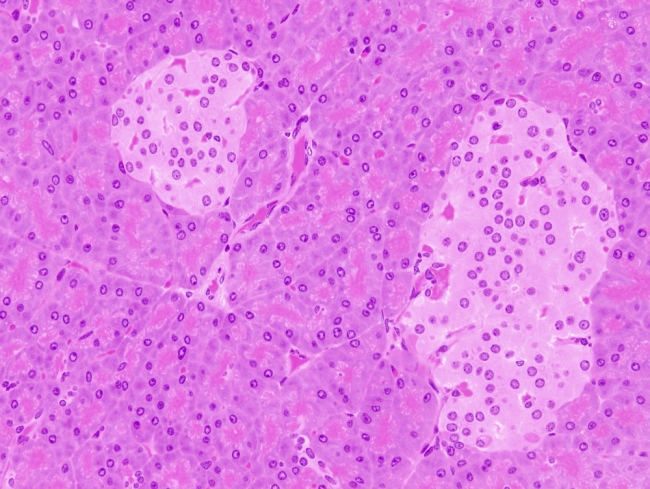 This image is from pancreas.
Put the cursor over the mouse to see where the image comes from.

The pancreas consists in an exocrine component, the pancreatic acini, and an endocrine part composed of the Langerhans islets. That is why it is named as amphicrine gland The major part of pancreas corresponds to the exocrine part (98-99 % in humans). The serous exocrine cells show a rounded nucleus and dark cytoplasm. The cytoplasm is more clear in the apical part because of the higher density of secretory zymogen granules containing digestive enzymes (zymogens are inactive enzymes or proenzyme). Abundant rough endoplasmic reticulum is localized in the basal cytoplasm of serous cells, where enzyme precursors are synthesized, that gives a darker color. Within serous acini, there are weaker stained cells which are named as centroacinar cells. They form ducts to collect the secretory substances released by serous cells. These acinar ducts join together and form the interlobular ducts, which in turn flow into the hepatic ducts, and finally release the pancreatic secretory products into the gut. There are no myoepithelial cells around the pancreatic acini.